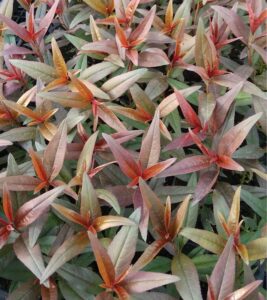 Clone selected from progeny obtained in Spain from the cross between the Spanish almond ‘Garfi’ and the North American peach ‘Nemared’ . Garnem has been granted European Community Plant Variety rights, number 16363. This rootstock has been selected primarily for almond, peach and nectarine varieties and shows excellent grafting compatibility. Plants in the nursery grow very well and vigour is similar to or higher than that of GF677. Plants have upright growth with little or no feathering during the first growth season. Leaves are large and red, with characteristics between those of almond and peach. Good performance in the nursery for spring, summer and autumn bud grafting and micrografting. The percentage of bud take is high for all known peach, nectarine and almond varieties. Tolerant to drought conditions and to poor soils; the level of tolerance to iron chlorosis is lower than GF677; low tolerance to asphyxia caused by waterlogging; performs well in replant situations. Plants grafted on this rootstock are more vigorous than those grafted on GF677 and need summer pruning to avoid excessive shoot growth and shading inside the canopy with negative effects on fruit size and quality. Tolerant to the main root-knot nematode species affecting prunus, including Meloidogine arenaria, M. hispanica, M. incognita and M. javanica. Susceptible to the root-lesion nematode Pratylencus vulnus. Susceptible to crown gall caused by Agrobacterium tumefaciens, This rootstock can replace GF677 in soils with nematodes, but its tolerance to waterlogging and calcareous soils are lower than that of the well-known and tested GF 677.